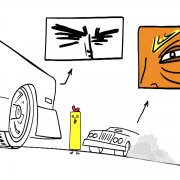 Here is the first episode of a new animation called ‘McSquared’ we worked on with two great economists. David Mcwilliams is a well known Irish economist, broadcaster & author. Paul McCulley is an American economist and former managing director at PIMCO. He coined the terms “Minsky moment” and “shadow banking system”, which became famous during the Financial crisis of 2007–2009.

The animation is a mixture of 2d & whiteboard animation. In this episode they discuss ‘The Coming War between Trump & The Federal Reserve’.